The Importance of Habit

The Importance of Habit

What is a Habit?

Habits are the things a person does repeatedly until such time that it becomes automatic. People develop countless habits through repetition. It is often unnoticed because we don’t regularly check our routine, we just do it. Doing the same things over and over again is a form of learning until, in the long run, the one doing the action towards a situation faces it with familiarity and not in varied ways anymore. Habits are somewhat mastered acts that people do repeatedly.

We can develop habits that are both good or bad for or health and fitness. An example of a bad habit is eating excessive calories for the amount we move or eating processed foods and refined sugars that are convenient but don’t give us any nutritional value or prolonged energy. An example of a good habit is getting a constant 8 hours of sleep each night as we know this is important for us to exercise and function throughout the day. If we focus and are conscious of our routine every day we can then begin to notice what habits are good and what habits are bad. It can be incredibly hard to break a bad habit so consistency in building good habits day by day will get us to a place where the good outweighs the bad. Research has shown that it takes on average 66 days to form a habit to be fully implemented into your lifestyle. We will have days where we go off track but it is vitally important that we pick ourselves back up and keep reaffirming the positive habits that will benefit our health and fitness.

Popularised by Charles Duhigg in “The Power of Habit” and explored further by James Clear the author of “Atomic Habit” the understanding of how habits are formed has allowed us to understand what specifically we need to do in order to build better habits. The image below displays the four stages of how a habit is created.

Each phase of the loop is as important as the next and this four-step pattern is the unpinning of every habit that we create. This is the sequence that your brain runs through each time in the same order. 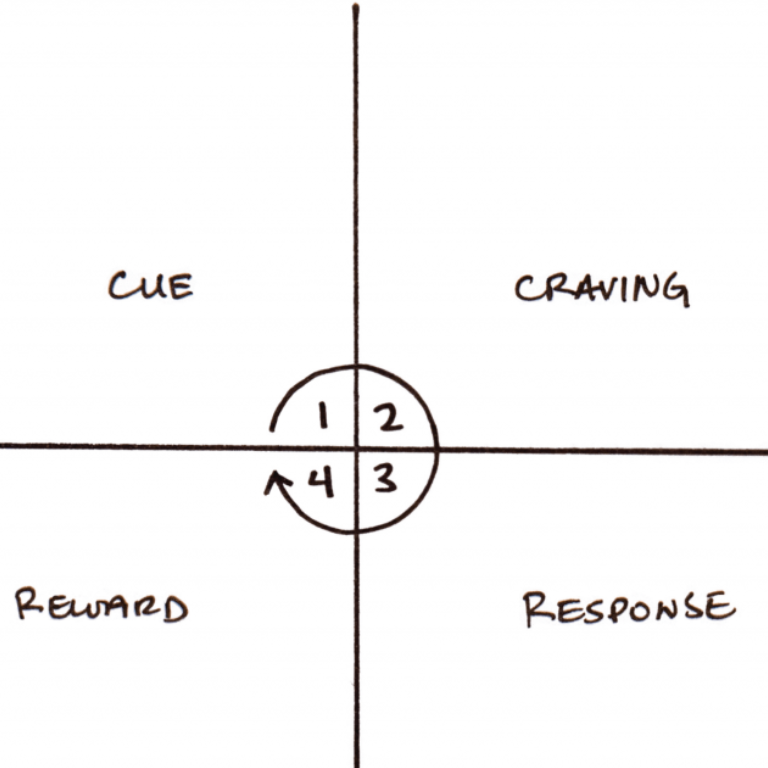 The cue is the trigger that initiates your behavior. This is that piece of information that you receive that suggests there is a reward available. As human beings, we may initially pay attention to primary rewards that provide us with food, water, and shelter. In modern society, we also pay attention to secondary rewards that provide us with money, power and status, praise and approval, love and friendship, or a sense of personal satisfaction.

Our brains are constantly monitoring our environment for cues that will lead to rewards for us. After we are aware that these exist naturally it leads to a craving for the reward.

The craving is the motivational force behind every habit. Without some level of motive, we have no reason to create our behavior. It is vital to understand is that it is not the act of the habit that you crave but the benefits you receive from doing it. For example, you do not crave exercise but you crave the benefits you receive from doing it like having better energy levels, looking better, or feeling a sense of accomplishment.

Cravings are highly individual and differ from person to person. The same cues do not motivate everyone as one person might not be motivated by a certain cue and they might not have the craving for that reward. For example, one person could be motivated by seeing some out running or exercising, and because they crave the rewards that exercise gives them it’s a cue for them to get out and exercise, and for another person, this may have little to no effect.

The response is the actual habit that is formed as a result of the craving. The response can take the form of a thought or an action. A response accruing will depend on how motivated you are to achieve it (how big the craving is) and also your level of ability depending on what it involves. If a particular action requires more physical or mental effort than you are willing to expend, then you won’t do it. For example, if you want to complete a Triathalon but you can’t swim then you won’t be able to achieve it. This is where the level of response comes into play and deciding where the effort needs to go to form a habit. If you are willing to put the time into learning how to swim first and having that as your primary response then you may achieve the bigger goal in the future.

Finally, the response delivers a reward when the goal is achieved.  The cue is about noticing the reward. The craving is about wanting the reward. The response is about obtaining the reward. Why then do we chase that reward? Because it awards us satisfaction and a learning experience that teaches us about ourselves.  Firstly, rewards provide benefits on their own. Food and water deliver the energy you need to survive and thrive. Getting fitter improves your health and well-being but it also creates a more immediate benefit that satisfies your craving to eat or be feel better and these rewards deliver contentment and relief from craving.

Secondly, rewards teach us which actions are worth remembering. Our brain detects the rewards and what we did to accomplish them. Feelings of pleasure and disappointment are part of the feedback mechanism that helps your brain distinguish useful actions from useless ones. Rewards close the feedback loop and complete the habit cycle.

If behavior is insufficient in any of the four stages, it will not become a habit. If you eliminate the cue, your habit will never start. Reduce the craving and you won’t experience enough motivation to act. Make the behavior difficult and you won’t be able to do it. And if the reward fails to satisfy your desire, then you’ll have no reason to do it again in the future. Without the first three steps, the behavior will not occur. Without all four, a behavior will not be repeated.